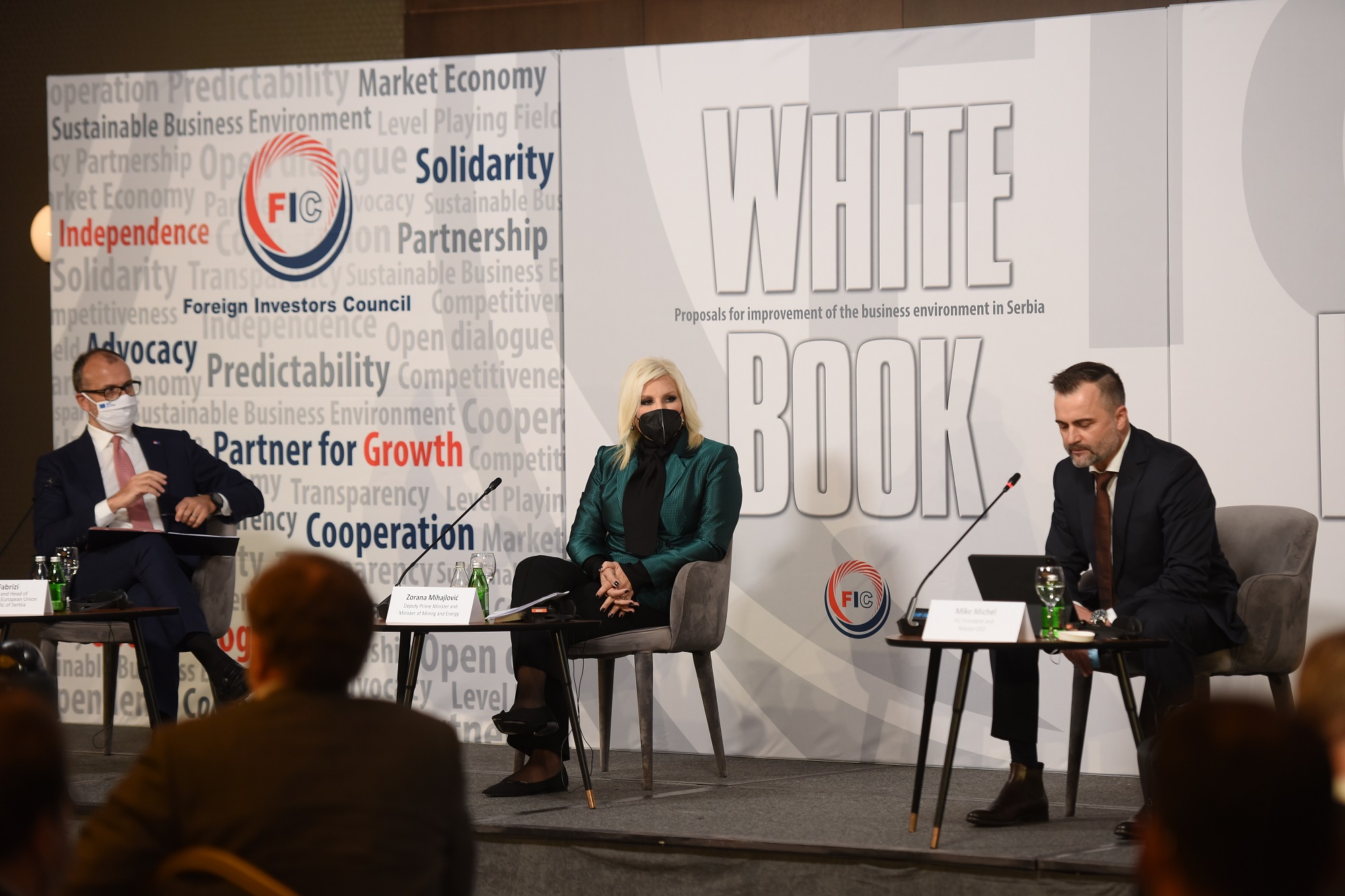 White Book 2020 was launched on November 19, at an online event with live broadcast accessible to all the registered guests. Despite the challenging circumstances of COVID-19 crisis, FIC gathered high-level speakers and panelists: Prime Minister Ana Brnabic, Deputy Prime Minister and Energy Minister Zorana Mihajlovic and Head of the EU Delegation Sem Fabrizi. FIC views were promoted by its president Mike Michel, who also moderated the event, while the methodology was presented by the White Book Editor-in-Chief Miroljub Labus. The recording of the event can be seen at the FIC YouTube channel.

FIC President Mike Michel drew attention to the high level of uncertainty and challenges in 2020, as the epidemic affected everyone in various aspects, from private lives to business. “COVID-19 has brought a level of uncertainty like no other crisis, making 2020 seem like several years in one”, he said. “I’m proud and inspired by the way our organisation has faced the crisis, with flexibility, courage and solidarity”, Mike Michel added, thanking the FIC team and members for the enormous contributions in such a situation. White Book is adapted to the circumstances of the COVID-19 crisis, FIC President said, explaining that instead of the score-cards showing the level of improvement, this year the focus was on the COVID-19, and the prioritized proposals of what should be done. FIC is aware of the challenges the epidemic brought, but the expectations remained unchanged: to further accelerate the reforms; to continue and accelerate membership negotiations with the EU; as well as to work on sustainable fiscal consolidation and improvement in implementing laws. This year’s analysis is structured around the priority areas for FIC:  taxes, labour, inspections and food safety, infrastructure and real estate, health, bankruptcy, foreign exchange, with digitalization and e-commerce as this year’s priorities. Mike Michel clearly stated that it is of key importance to take good decisions in order to head towards recovery. “This is not business as usual, and the future depends on a lot of uncertainties. As countries restart economies, this is a key moment for all of us, for governments, businesses and individuals, to pull together, to make the right choices for better tomorrow”, FIC President said.

FIC Editor-in-Chief Miroljub Labus provided information on the way WB was adapted to reflect the current situation and become probably the first serious analysis of how COVID-19 affected the business climate, with concrete proposals on how to overcome the problems. Analysis was provided for the 59 sectors, with 327 concrete proposals. This year, the WB index provides info on what is most needed in order to face the pandemic and its impacts. The top priorities include personal data protection, trade, mortgages and financial leasing of real estate, public procurement and central evidence of beneficial owners, followed by staff leasing, sanitary and phytosanitary inspections, and energy, followed by dual education, judicial proceedings  PPP,  Restitution, VAT, Law on Central Register of Temporary Restriction of Rights, Insurance: Related legislation, NPL, Food Safety Law and Law on Notaries. Although the GDP decrease in Serbia was not as big as in most other European countries, this is not the reason to rejoice. On the contrary, we should be worried as the continued recovery of Serbian economy depends on the EU recovery, Miroljub Labus said. He praised the Government’s incentives to the economy, but outlined they were unsustainable as they lead to the macroeconomic disturbances. FIC proposes serious and rapid institutional reforms aimed at improving the business environment and providing impulse for domestic and foreign investments. Main FIC proposals are to: return to macroeconomic stability; pursue EU integrations; and pursue concrete reforms, presented in 327 proposals across 59 sectors. Some of the priority sectors include investment in infrastructure and tax administration reform.

Head of the EU Delegation in Serbia Sem Fabrizi welcomed White Book Launch being held despite the challenges brought by the COVID-19 crisis. “Despite the challenges we are able to stay on this podium for the important annual event about what the business community thinks about the business climate and outlook”, he said. There is a “strong and encouraging convergence” between the priorities identified by the European Commission in the Progress Report on Serbia and FIC White Book. Head of the EU Delegation said he looks at the economic outlook for Serbia for 2021 with relative optimism, as it is forecasted to be quite resilient and have better numbers than the EU. “I hope that the 2021 will be the year in which we solve the problems”, Sem Fabrizi said, adding that there is no place for complacency, as it is clear that sorting out the crisis will take time, and that the pandemic will leave scars. In the context of the strong integration of Serbia in the European market, he said that the 1.7 trillion EU budget is expected to boost the recovery of the EU, which will also have a positive effect on the Serbian economy. EU also has the ambition to provide 9 billion euros in grants in the Western Balkans region in the period 2021 to 2027. When the loans are included, there will be 28 to 29 billion euros for the region, which is 1 third of the GDP. Finally, common regional market with the four liberties will also help mitigate the consequences of the crisis.

Serbian Prime Minister Ana Brnabic thanked FIC members for significant contribution during the crisis, which includes donations in money and equipment for the health system, but also efforts to maintain the level of operations, to keep employees, and sometimes even to hire new employees. She praised the resilience of Serbian economy, recognizing that the Government’s measures to protect the economy and contain the epidemic required huge expenses (for PCR and antigen test, equipment for the health institutions, as well as support measures to the economy). “We have the reason to be happy and proud as an economy with the best results in Europe, but I agree (with WB Editor in Chief Miroljub Labus) that we cannot sustain growth without the strong EU recovery, and above others the recovery of Germany and Italy on which we rely the most”, she said. Prime Minister said that Serbia will remain committed to macro-economic stability. Public debt is to be held under 60% of GDP, and the budget deficit is planned to be contained under 9% which would allow us to recover the budgetary stability within 2 years.  Ana Brnabic presented main plans related to development of infrastructure and digital corridors, adding that the Government will put focus on boosting productivity and innovations including artificial intelligence in all aspects of the society. She welcomed the FIC decision to outline digitalization as a key priority.  Prime Minister invited FIC members to use the incentives created in 2018-2019, but also to invest in innovations, for example by opening development centers in Serbia.

In a panel discussion that followed,  several important issues were tackled: business climate and proposals for its improvement; EU view on the current situation in Serbia and ways to accelerate the EU accession process; plans for the energy sector, as well as for establishment of the e-mining and e-energy systems; reforms expected by the EU for pursuing the investment plan in the region; and White Book Task Force. Panel was moderated by the FIC President Mike Michel.

Energy Minister and DPM Zorana Mihajlovic said that the key strategic goal of the Government is the EU accession, and that it is very important for the business climate in Serbia. When it comes to the energy sector, it is important to pursue the EU reform agenda, but also to reduce some requirements in order to attract foreign investors.

EU view was presented by the Head of the EU Delegation Sem Fabrizi. He said that Serbia has made a lot of progress, but that the Annual Report, official EU instrument, showed that the progress is uneven. Some areas such as transport marked more significant improvement, while there is more to do in the areas such as agriculture, that are more complex. Progress in the rule of law is more limited than in the economic area, Sem Fabrizi said, adding there is always the encouragement to do more.

DPM and Minister of Mining and Energy Zorana Mihajlovic was also asked about the plan for the energy sector and e-permits for the energy and mining sectors. She said that the steps taken in the transport sector and accomplishments made with construction permit should also be pursued in the energy sector, and enable Serbia to become an energy corridor and energy hub. The policy on the energy sector is quite important, but also quite sensible, she said. As some key directions in the energy sector she cited: energy security (especially having in mind the expected increase of the electricity needs in Serbia); sustainability of the energy sector; decarbonization; significant changes of legislation (Energy Law, renewable energy, energy efficiency, Law on Mining); as well as changes in the structures of the sectors, such as the separation of activities in the gas company Srbijagas. She said that the plan is to introduce the quick procedures for energy and mining, alike those introduced in the construction. Procedures are planned to be reduced to 3 steps and most which would significantly safe the time and therefore the money. This will be the way to “open the doors of energy and mining”.

Asked about the reforms required for the EU investment plan, Head of the EU Delegation Sem Fabrizi said that the EU was precise on what the plan was about, and identified 6 areas. For each area the projects to be pursued were identified. He also mentioned some important aspects of the development to be pursued, such as regional dimension, development of broadband infrastructure and green aspect of energy development.

DPM Zorana Mihajlovic was asked about the WB Task Force, and said that she expects that this body remains active as it is important not only for defining the problems, but also for monitoring and control having in mind that it happens that the institutions are sometimes slow to act. The TF was operative and clear, and managed to speed up some processes. She thanked for the cooperation and said she hopes that the work will be pursued.

As a conclusion, Sem Fabrizi said that the voice of business is very important, and praised the fact that FIC advocates the EU accession process. FIC President Mike Michel thanked the participants and panelists of the conference and FIC members. He said he was optimistic that the next year it will be possible to hold an event with more people present at the live event.