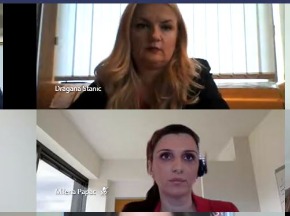 On June 2, FIC organized online Conference on Digitalization titled: ‘’Digitalization in Serbian Regulations: Possibilities and Limitations’’. Interest of both members and state institutions was high. The event attracted around 100 FIC members and gathered 15 representatives of the 7 state and Government institutions to discuss with FIC Committee chairpersons challenges and benefits of digitalization in various areas.

It was clearly stated that the conference was just the initial dialogue to be followed by concrete initiatives for regulatory changes. The discussion was very constructive and resulted in identification of several aspects of digitalization to work on. State representatives came from the National Bank of Serbia, Ministry of Health, Ministry of Justice, Ministry of Finance, Ministry of Labour, Employment, Veterans and Social Affairs, Customs and Tax Administration. The FIC chairpersons from Digital & E-Commerce, HR, Legal, Pharma and Tax Committees actively participated in the discussion. The participants were greeted by the FIC Executive Director Aleksandar Ljubic. Event was moderated by the President of the FIC Digital and E-Commerce Committee Nebojsa Jovanovic. Video record of the conference can be accessed here and press release here.

In the welcoming address, FIC Executive Director Aleksandar Ljubic said that the idea to organize a conference came as a result of discussion with FIC members, who said the focus should be put on digitalization in the new edition of the White Book. It also emerged as an issue of key importance during the COVID-19 pandemic, he explained.

Digital and E-Commerce Committee President Nebojsa Jovanovic, who moderated the event, said that the COVID-19 crisis clearly showed the importance of digitalization as a need and necessity. It obliged us to function in a different way, to work from home, and pursue other changes. He identified IT companies and those from the area of finances as leaders in finding new solutions through optimization of processes and improvement of user experiences. All other industries follow this path, Nebojsa Jovanovic said.

Vice-Governor of the NBS Dragana Stanic said that the institution took very seriously the task of implementation of new technologies. In this respect she cited the introduction of the instant payment system IPS in 2018, which enabled the execution of payment within a few seconds at any time each day in the year, as well as the Decision that allowed the identification of clients online even for the initial contract. NBS will continue to build further on the IPS, to establish a central addressing scheme which will allow the transfer of the funds to someone on the basis of their alias or mobile phone and allow a bill presentment. Other NBS plans include: testing the possibility to apply blockchain technology in central banking; continuation of work on the register of startups; and promoting Serbia as a destination for the Bank of International Settlements Hub as three more hubs are to be established.

Assistant Director of the Tax Administration Sasa Dulic said that the commitment of the TA enabled the smooth functioning even during the toughest restrictions due to the COVID-19 pandemic. In the 2 months of state of emergency there were 971.000 tax returns, as well as more than 8,000 tax certificates and 453,000 of requests on tax records. “We identified other things that taxpayers need, and there are some other services to develop”, he said.

Independent Advisor in the Labour Ministry Ivana Nikolic said that the COVID-19 showed that the current framework in Serbia allows the successful organization of work from distance and work from home. It was enabled by the Labour Law in 2014, she said. Work from distance has its benefits for both the employers (reduced costs for offices, infrastructure and transport) and employees (easier harmonization of the business and private obligations), Ivana Nikolic said.

Assistant Director in the Customs Administration Ljubica Barbulj said that in February this year the strategic documents were adopted for the development of custom services and electronic systems of Customs Administration by 2024. The aim is to modernize custom services and harmonize with the EU. In this moment the Customs Administration is working on the automatization of the export-import system and system of custom decisions, with support from IPA 2020. The project is to be finalized in 2023. Other large project is to establish a single window system which will enable submission of all the documents in one place by 2025.

Assistant Minister of Justice Jelena Deretic cited the innovations that are soon to be implemented, such as: the application for electronic auctions in the enforcement procedures that will also guarantee anonymity of bidders, expected to be put in operations on September 1st; electronic enforcement procedures; and substitution of decentralized software for court procedures (in general basic and higher courts and commercial courts) by the newest software with the EU support. Jelena Deretic drew attention that the electronic announcement table of the courts is enabled by the amendments of the Enforcement Law, to which FIC contributed.

State Secretary in the Health Ministry Vicko Ferenc said that the digitalization of the health system is challenging because of the complexity and the size of the system, as well as the uneven situation in health institutions with regard to the networking equipment. Significant steps were already taken informational IZIS system encompassing various aspects such as taking appointments, web portal, call centar, electronic prescriptions etc. Further improvements are planned, such as the portal e-radiology, electronic waiting list, as well as further networking of the institutions. Information services enable reduction of costs and better use of the resources, Vicko Ferenc said.

Legal Committee Vice President Jelena Vukic-Suljagic recognized the progress in digitalization in Serbia but also pointed out to the need for further improvement. In particular she cited the need to allow the digital bill of exchange and electronic obligatory auto insurance policy. Digital bill of exchange is a frequently used instrument, she said adding that with the current framework it is impossible to conclude a transaction online, such as a contract for banking product, if it involves a bill of exchange. Fine tuning of regulation would be sufficient to allow it, Legal Committee VP said. She outlined that it is of utmost importance that the rules are made user-friendly to enable the wide use of instruments. Dragana Stanic from the NBS agreed that there are no insurmountable obstacles for allowing digital bill of exchange and that the NBS is ready to work on that initiative. As for the compulsory auto insurance, she said that the electronic format is being considered by the Working Group for the compulsory insurance in traffic.

Taxation Committee President Dragan Draca said that the experience from the crisis caused by the COVID–19 epidemic showed that the electronic services of the tax system function very well. As needed improvements he cited the following: enabling tax return formats adapted to the needs of clients, such as printing or transfer in Excel; enabling to obtain tax identification numbers and all tax certificates electronically; improvement of the EPorezi platform; and enabling online overview of import custom declarations with all details for payment of custom bills. Tax Administration representative said that the transfer to the other account will be enabled electronically, and even automatically in the simple cases. While e-mail communication will be promoted as a safe way of communication, the goal is not to make it dominant, but to privilege structured submission via web portal as it is more efficient. When it comes to the format for data exchange, he said that every return can be saved in .xml format, and that for some cases there is no need for Excel formats. Customs Administration representative said that the automatization of the import-export system is ongoing, and that the temporary solution can be envisaged if needed.

HR Committee President Milena Jaksic Papac said that one of the key issues raised by the companies after the experience of organization of work during COVID-19 crisis is the need for digitalization and simplification of the strictly formal way of communication between the employer and the employee. There is the need to amend the Labour Law to make it possible to pursue formal communication electronically, by using electronic documents, e-signature, e-delivery, e- announcement table, and electronic evidences when needed. As one of the challenges in the past 2 months she cited that the employers weren’t allowed to provide electronically the decisions on working from home. HR Committee President also said that there are many forms of working relations that need to be recognized, such as virtual and online employers, digital employees, distance workers, e-nomads etc.  Labour Ministry Independent Advisor Ivana Nikolic responded by saying that electronic communication was used during the state of emergency, and that it is allowed in various situations. New Labour Law is planned to be adopted by end-2021 to align it with the EU and ILO directives and international standards, and that will be the occasion to review proposals and initiatives.

Legal Committee President Igor Zivkovski put focus on artificial intelligence and machine learning. He said that the new innovative ways of data collection and processing can be used to improve the quality and reduce costs of procedures before the public bodies such as courts and notaries. Machine learning can be used for data analysis in view of predicting the outcome of procedures, which would help lawyers provide better answers to their clients. Advantages of use of such systems include the increase of speed of resolution of disputes, data protection, reduction of costs for court taxes, reduction of human error, he said. Justice Ministry State Secretary Jelena Deretic said that the studies by the Ministry showed that artificial intelligence and machine learning would be beneficial. Artificial intelligence is used at the moment for the search system on the web portal “sudskapraksa”, which provides access to the database on 40,000 judgments. For the misdemeanor courts there is a significant project planned, which was about to be presented.

Pharma Industry Committee President Radomir Cerovic said that the momentum gained during the crisis in the health sector should be utilized for further improvement. Digitalization could result in longer lifespan for patients, he said. Personalized medicine is not possible without digital management, he explained, adding that the analyses of large quantity of data would enable to take into account not only the diagnosis but also other factors such as genetics and social background when deciding the treatment. This personalized approach is much better than uniformed protocols, he said. Integration of data on various levels of the health system is therefore very important, Radomir Cerovic concluded. He also said that there is a need to improve the process for putting medicine on the list. Ferenc Vicko from the Health Ministry agreed with the importance of collecting data. He said that the outcomes should be a key factor in treatment.

As a conclusion of the conference, moderator Nebojsa Jovanovic said that the discussion would continue to pursue specific topics raised.