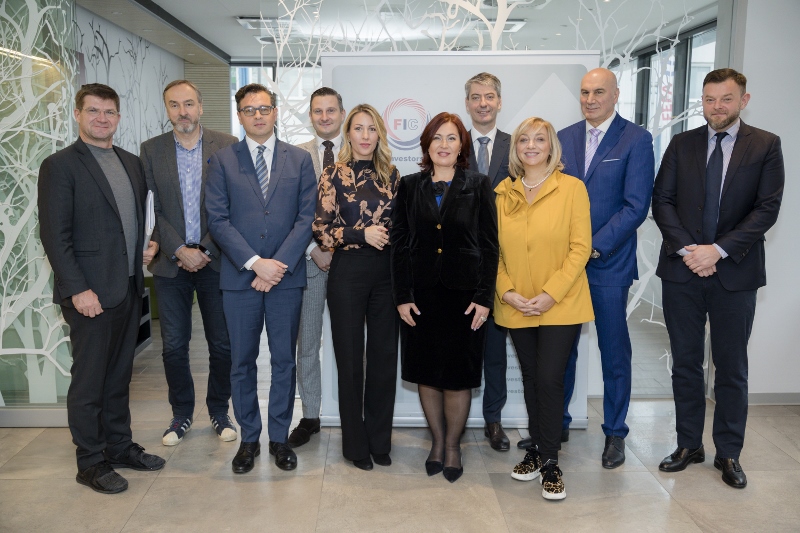 Belgrade, 12th, December 2019 – The Foreign Investors Council (FIC) held the regular annual session of the Assembly, electing the new Board of Directors, adopting the Annual and Financial Report for 2019 and voted for proposals for changes of the Statute. For the second time, this year, the “Committee of the Year Award” was rewarded, this time to the FIC Tax Committee, as the most active committee in 2019. The new FIC Board of Directors consists of the following officials: Market Head – Nestlé South East Market Yana Mikhailova, Telenor d.o.o CEO Mike Michel, VIP Mobile d.o.o. CEO Dejan Turk, Ernst&Young d.o.o. Managing Partner and Head of Tax Ivan Rakic, G4S Secure Solutions d.o.o. Managing Director Aleksander Dawid Sold, Belgrade airport d.o.o. CEO Francois Berisot, FCA Serbia d.o.o. CEO Silvia Vernetti – Blina,  Corporate Affairs and Communications Director at JTI Adriatica Goran Pekez, Raiffeisen banka a.d. Beograd Chairman of the Managing Board Zoran Petrović, Roche d.o.o. General Manager Ana Govedarica and SGS Beograd Managing Director Marinko Ukropina.As a reminder, as of year 2017, FIC has a new election model – seven Board members are elected as a team and four as individuals, which contributes to the greater transparency of election process and equal treatment of FIC members. This year, as proposed with the new FIC Statute changes adopted by members, Vice Presidents are to be elected on the upcoming BoD session among all elected Board members. Newly elected FIC Board of Directors expressed gratefulness to FIC members for their votes and trust and pointed out that ‘’with a refreshed team, FIC will continue to even more vigorously advocate for acceleration of reforms, better implementation of laws and continuation of harmonization with EU regulation. We see the joint Task Force, formed with the Government, as an excellent tool to jointly achieve better progress in most important topics for investors”, concluded new FIC Board of Directors. Assembly meeting gave the opportunity to track the record of past activities and adopt Annual and Financial Report for 2019. This has been an important year for FIC, which brought changes in management both at the level of the FIC Executive Director and Board of Directors. Apart from its best known projects: the White Book, ”Dialogue for Change”, and annual visit to Brussels, FIC was highly active throughout 2019, demonstrated by the following figures – FIC launched over 50 regulatory initiatives, held more than 150 meetings with the Government and other stakeholders and had around 600 media reports. FIC also maintained close interaction with its members via 40 committee meetings and around 80 individual meetings. More information in the FIC Annual Report for 2019 available for free download on the FIC website (www.fic.org.rs). About FIC:  From an independent business association created by 14 companies, we stayed faithful to our principles and grew to gather around 120 companies from all around the globe who have invested over EUR 35 billion and directly employ more than 100,000 people in Serbia compared to EUR 150 million of investments and 3.160 employees in 2003!. FIC main goal is to influence the improvement of business climate in Serbia by making concrete reform proposals and building a business portal for communication with the authorities in Serbia. FIC is also focusing on promoting solid business ethics and high corporate governance principles within the organization and towards local companies, the Government, and other external stakeholders. Through support and active engagement of membership, FIC has proven to be a strict guardian of the business community interests and at the same time a reliable partner to the Government of Serbia and other relevant stakeholders.
Previous
Next