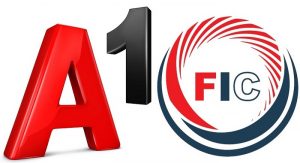 FIC members had a pleasure to meet in the informal atmosphere at the first cocktail organized since the beginning of the COVID-19 outbreak more than a year ago. Cocktail sponsored by FIC member A1 Serbia was held on June 21 and attracted around 100 members to the Navigator roof terrace. FIC Executive Director Aleksandar Ljubic thanked A1 company for organizing the cocktail at the lovely venue, and members for joining after a long pause. “The FIC was working very hard in the past year under very special circumstances, and we succeeded to keep our members together in these difficult times for all of us”, he said, adding that FIC is proud of the magnificent work committees did in the last year. CEO of A1 Serbia and A1 Slovenia Dejan Turk said he was happy to open a gathering season on the first day of summer, and to see after a long time so many people together, with smiles on their faces. He presented the recent change in his company, that changed name from Vip to A1 Serbia within a larger transition in the region initiated by a mother company, Austrian A1. The change of logos had to be done in one day on all the locations, from headquarters and shops to kiosks, he said, outlining he was proud of the team for successfully going through such “wild” change. The company will remain focused on the consumers, and also continue to be a good employer. The name A1 indicates that the company’s goal is to be the number one in the country, and with this goal there will be a lot of investments in the network, infrastructure and digitalization for A1 as an operator, but also for businesses that are clients. Investments in networks will include not only the networks 2G, 3G and 4G, but also 5G with the first base stations planned at the beginning of the next year. “Everything is about digitalizing, as we found out in the hard way during the last year and a half”, Dejan Turk said, adding that A1 has a company called A1 Digital, dedicated to digital solutions for businesses. Corporate and social responsibility will remain the important area for A1, he said, adding that now it’s called environmental, social and governance (ESG). He reminded of the latest campaign “Svet kakav zelis” – “The world You Want to Live In”, with the goal to invite every citizen of Serbia to do the small things to make the world a better place. After short speeches, guests use the opportunity to gather, talk to each other, and symbolically taste foods and drinks from the countries in which A1 group operates.