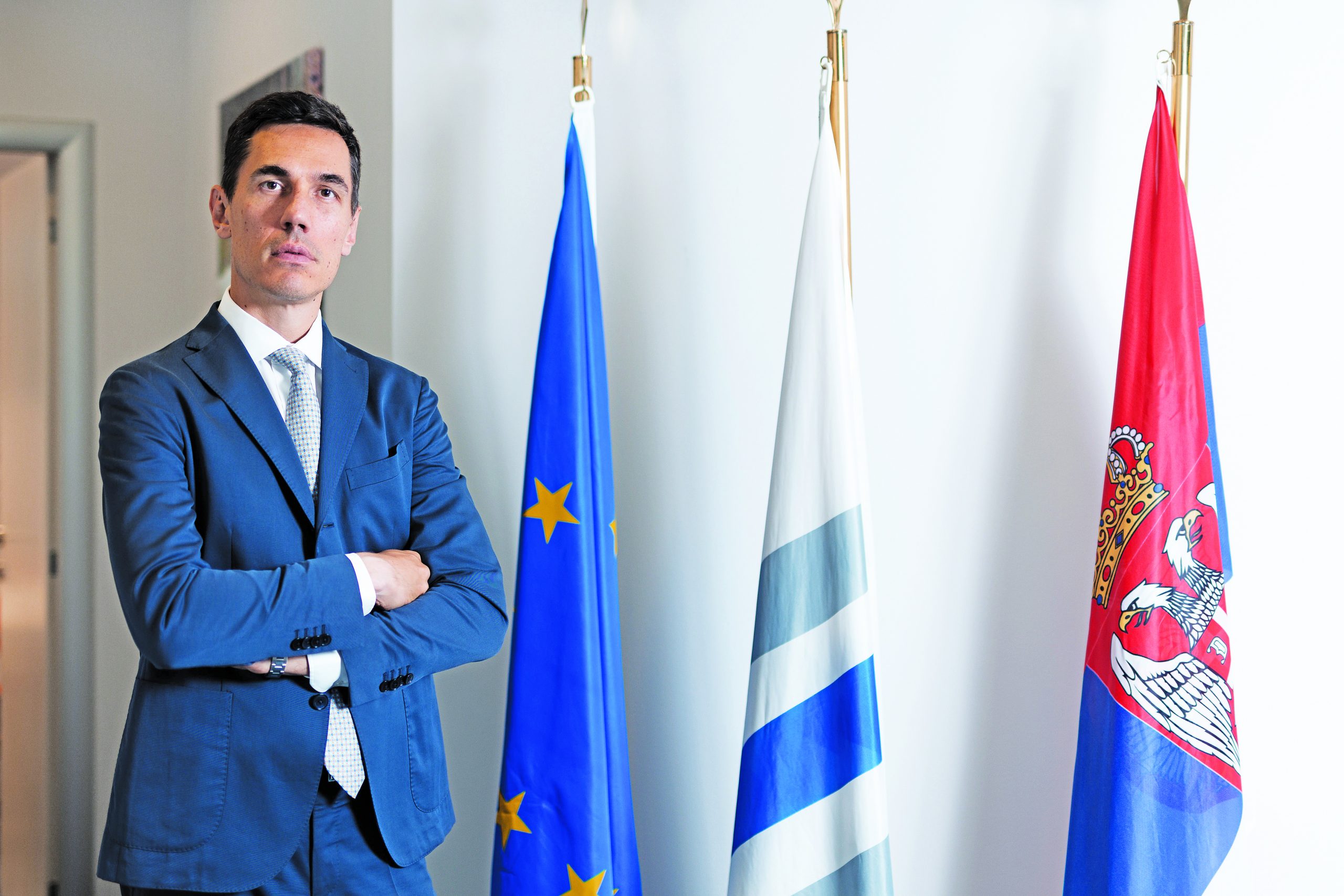 A new dedicated branch, EIB Global, is helping us foster strong partnerships within the European Commission-led Team Europe structure and increase support for projects in the areas of renewable energy and the green transition. In line with the Green Agenda for the region and “just transition”, the EIB intends to expand its involvement in the energy and environmental sectors. 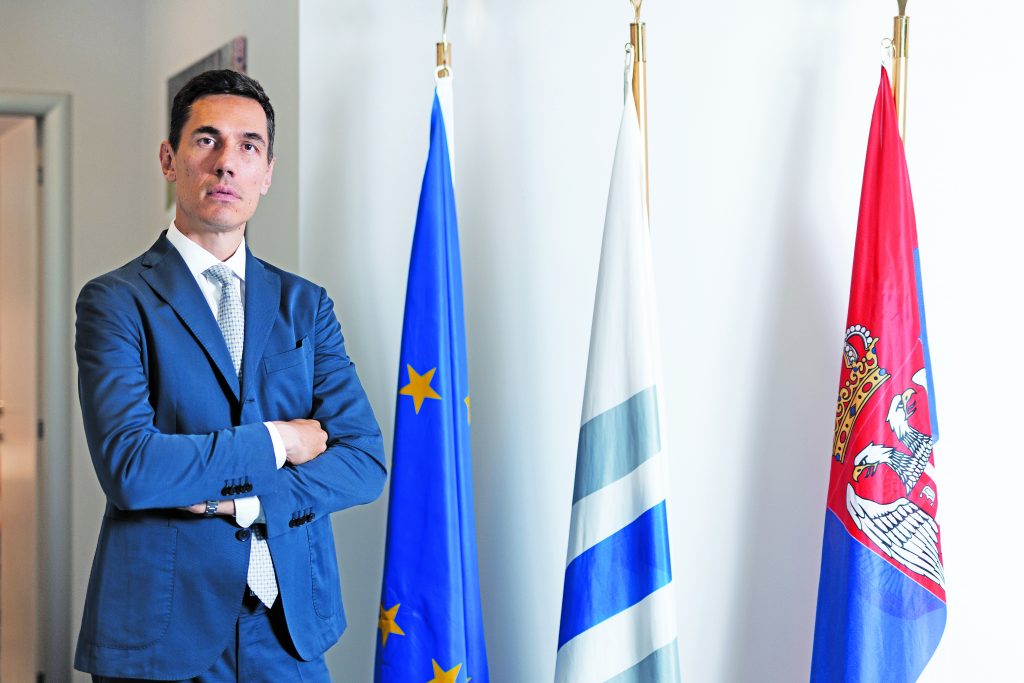 Historically, transportation has been one of the main sectors funded by the EIB. In the last decade alone, the EU bank has invested over €9.5 billion in the Western Balkans. “Since we started our operations in the Western Balkans, we have invested €5 billion in the transportation sector“, says Alessandro Bragonzi, head of the European Investment Bank’s regional representation for the Western Balkans. “One of our most ambitious projects is financing the highway sections of the Pan-European Corridor Vc in Bosnia-Herzegovina, connecting the country with Croatia and Hungary and facilitating commuting for 50% of the country’s population“. The EIB has unlocked €1 billion for this project to date. “We have provided €2.3 billion to the transport sector in Serbia, contributing to the construction and rehabilitation of safer roads,
railway sections, bridges, tunnels and bypasses. The largest EIB financed project so far was the construction of a motorway along Corridor X. The Bank provided €579 million to help develop road links between Serbia and Bulgaria, Serbia and North Macedonia and on to Greece. It helped to connect and integrate the Western Balkan countries regionally and with the European Union by creating the shortest routes to connect Central and Eastern Europe.

Our new Transport Lending Policy will be the blueprint for supporting the rollout of new innovative technologies — as well as mature Paris-aligned projects — to enable the transition of the transport sector to decarbonisation and depollution, safety and security, accessibility, greenness and efficiency

“Large-scale projects along the major corridors have enabled the Western Balkans to make a contribution to their prospective EU integration and the acceleration of trade and economic relations. For example, the construction of a new border crossing and bridge in Gradiška as part of Corridor Vc facilitated the flow of goods and people from Bosnia-Herzegovina to Croatia and on to the EU single market — many were previously stuck on the border for up to eight hours. Similarly, the construction of the Niš-Merdare road section
— as part of the corridor connecting Southern and Eastern Europe
— will enhance regional connectivity (Serbia with Albanian ports on the Adriatic Sea), and the development of the districts of Southern
and Central Serbia. The EIB is providing €100 million to finance the project, in addition to €40 million in EU grants,” says Bragonzi.

“In addition to funding road infrastructure, the EIB is a lead financier for the modernisation of railway networks, which are a greener and   more efficient mode of transportation. In Serbia, the EIB is already financing the reconstruction of the Niš-Dimitovgrad railway section,
with other railway routes on Pan-European Corridor X (such as Niš- Belgrade) under appraisal or currently being prepared. Finally,we are providing €100 million to support the improvement of inland waterway navigation along the Sava and Danube rivers, in combination with EU grants. Inland navigation is crucial for providing sustainable transport links, promoting faster economic exchange and offering new development opportunities for local municipalities and countries in the region.”

Do you consider that Serbia and the region are ready to take a giant stride towards sustainable, efficient and diverse sources of energy?

I would say that the current energy crisis is accelerating these processes, underscoring the importance of energy mix diversification and supply independence. As the EU climate bank, the EIB is committed to mobilising up to €1 trillion of investments in climate action and environmental sustainability projects during this decade. As a result, we have scaled up our green financing, and in 2021 this reached over 50% of our global investments. This will help us increase our technical support for our clients, helping them to develop new, sustainable projects. The EIB is also supporting the REPowerEU. This initiative was recently adopted by the European Commission and aims to rapidly reduce dependence on Russian fossil fuels and fast-forward the continent’s green transition. The plan envisages a series of short and long-term measures, including subsidies for vulnerable customers, faster deployment of renewable energy, decoupling of electricity and gas prices and increased diversification of the energy supply to respond to rising energy prices in Europe and replenish gas stocks. Most countries in the Western Balkans still rely heavily on coal or lignite for power production and, in light of the current energy crisis, it is critical to contribute to a more sustainable energy mix with renewable energy. Serbia has made significant progress in that respect, particularly via the adoption of new laws helping the renewable energy and energy efficiency sectors. However, more has to be done, and the EIB is committed to analysing and assessing both public and private sector-led projects that contribute to achieving the climate goals.

How are your projects that relate to the construction of sewage and wastewater treatment systems throughout Serbia advancing?

The EIB is providing €35 million in financing for the construction of the sewage system in Palilula Municipality, together with substantial technical assistance for related project preparation. The project is moving forward and tenders have been launched for the design of the sewage network in Krnjača and Borča, as well for the wastewater plant. This project will enable 173,000 people to access sanitation services, thus protecting the environment and public health. We are also providing €40 million for the modernisation, replacement and extension of water and sanitation infrastructure in a number of municipalities across Serbia, which will increase access to drinking water and sanitation services for 600,000 people. This project is benefiting from a €10.8 million investment grant from the EIB’s Economic Resilience Initiative (ERI).

Small and medium-sized enterprises were hit the hardest by the pandemic. And they are now suffering due to inflation and high energy prices. What kind of EIB support can they expect?

Within the €1.7 billion financial package delivered to the whole region as part of the EIB’s own contribution to the European Commission initiative for recovery from the coronavirus pandemic, the majority of funds were allocated to small and medium-sized enterprises (SMEs). Our recent EIB Enterprise Survey shows that companies in the Western Balkans remain credit constrained, mostly due to complicated procedures and higher interest rates. Although 10% of respondents report losses from extreme weather events in the last three years, only 21% of companies are investing in energy efficiency. They also need to speed up the digitalisation process to ensure competitiveness and adherence with the global value chains. To increase access to finance, we have unlocked close to €400 million since 2020 for Serbian small businesses. EIB funds have been made available, primarily via banks, to companies operating in a variety of sectors, under favourable and flexible conditions when it comes to extended maturities and lower interest rates. With €200 million signed with the Development Fund of Serbia, we are also supporting the Recovery and Development programme implemented by the Ministry of Economy and the Development Fund, which is expected to stimulate economic activity, protect over 47,000 jobs and create conditions for the creation of 5,500 new ones.

The EIB has secured investments in the Serbian health sector worth 250 million euros. We are glad that the Clinical Centre of Serbia, as part of those investments, recently opened its renovated building – a new wing encompassing an area of 86,000m2, equipped with the latest medical equipment, where 800 patients will be able to be accommodated

Viewed as a whole, how much has the overall business climate in Serbia improved to support domestic and international investments over the years? As a member of the FIC Board of Directors, how do you see the Council’s contribution to creating a level playing field for doing the business? 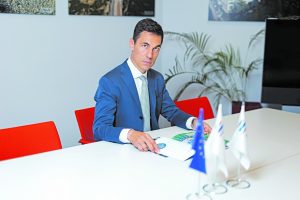 Organisations like the FIC are an important link between all market players, helping to facilitate dialogue and create a good environment
for businesses and investors. Serbia remains a leader in the Western Balkans for foreign direct investments, with the majority coming from the European Union. This is an indicator that the country is on the right track when it comes to proximity to EU standards and providing fertile business conditions.

The modernisation and improvement of public healthcare systems in the Western Balkans is among the EIB’s priorities. Which of the projects in Serbia would you single out?

The EIB has provided €250 million of investment for the healthcare sector in Serbia. We are glad to see that one of these investments, the Clinical Centre of Serbia, recently opened its newly renovated building — a new wing spanning 86,000m2 with the most advanced medical
equipment and able to accommodate 800 patients. The EIB funds also contributed to the renovation of 20 hospitals in Serbia, along with the Clinical Centre in Niš and Novi Sad, leading to the improvement of healthcare services for over 3 million people and increased resilience to crises like the coronavirus pandemic.

The EIB has also agreed a loan of 65 million euros as support to the “Linked Schools” programme in Serbia. Could we say that schools will be more ready this year to switch to online teaching if necessary?

This is certainly one of the goals of the project you refer to, and many improvements have already been made in hundreds of schools in Serbia. Our financing aims to support the national digital education investment programme by improving the digital infrastructure and teaching materials in schools with the provision of new digital equipment, the upgrade of the academic network, rollout of highspeed internet and training in digital skills. As a result, it will provide a massive boost to the development of innovation and digital businesses and the overall economic growth of Serbia, ensuring that everybody receives equal opportunities to benefit from the new possibilities of a digital era.