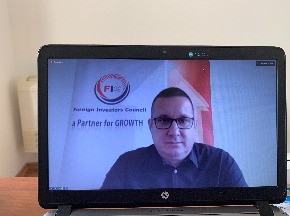 On the webinar of the Center of European Policy and EU Delegation on June 12, FIC Executive Director Aleksandar Ljubic said that demand will be of key importance for economic recovery and added that it is of key importance to track the health and social situation. “The crisis will end in the very moment we realize that it’s over, because of the brakes consumers put on spending, they will delay the planned purchase for better times”, he said.

FIC Executive Director also noted that the disruption of the free transfer of goods should never reappear. As he added, this was addressed in short delays through green corridors. Ljubic also tackled the issue of the work on distance and talked about the planned investments by the FIC members. The webinar “Serbia’s economic recovery after the COVID-19 pandemic – What is the best use of EU assistance?” was opened by the Head of the EU Delegation in Serbia Sem Fabrizi and SCC President Marko Cadez. Other participants included Head of the Regional Office of the European Investment Bank Dubravka Negre who is also FIC BoD member, Fiscal Council Member Nikola Altiparmakov, Mihajlo Vesovic, SCC Advisor to the President, and Association the European Policy Center representative Marko Obradovic.