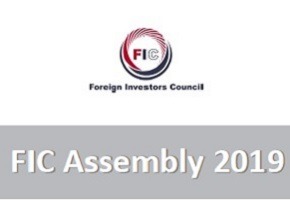 FIC Annual Assembly will be held on December 12 at 09.00, at the venue of the FIC member company – OTP Bank, Bulevar Zorana Đinđića 48v, and we invite members (this invite is solely reserved for Member Representatives of FIC members companies – CEOs) to use this event as an opportunity to influence the election of the new BoD, decide on the proposed changes of statute, as well as participate in discussion on FIC work and give proposals for improvement.

The invitation for participation at the event is extended only to CEOs (Member Representatives) of FIC member companies or an authorized alternative representative and FIC Committee Chairpersons. FIC members were encouraged to nominate for BoD and individually, with the deadline on December 4. Seven members will be elected as a team, and 4 individually. Members will also have the opportunity to decide on the changes of FIC Statute. Proposed changes, accepted at the BoD at November session, are meant to make FIC functioning smoother. More concretely it was proposed: to enable international financial institutions to become BoD members without elections upon accepted BoD invitation; to enable companies with franchise contracts to become FIC members under the same criteria prescribed for companies established with foreign capital; to enable organization of working committee meetings via e-communications; and to simplify procedure of appointment of the BoD VP. The most active committee will be rewarded with the Committee of the Year Award. The event will be the occasion for members to have their say on FIC activities and achievements in the past year, as well as plans for the upcoming period. Discussion will be based on the important documents that are to be presented – Annual Report of the BoD and the Financial Report. The refreshed, modernized and more compact version of the Annual Report, introduced last year, will be kept. Relevant materials are sent two weeks before the Assembly to leave appropriate time for preparation for the meeting and enable active participation of members’ representatives. There will be also an opportunity to put important issues on the agenda, up to three days upon being provided of the invitation. As your engagement as FIC members represent the core of FIC work, we urge you not to miss the opportunity to participate in discussions and decision making process on FIC functioning, results and achievements.