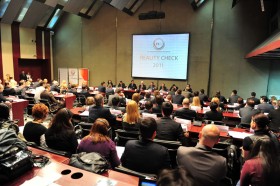 Belgrade, May 17th 2011 – Foreign Investors Council in Serbia organized today its second “Reality Check” Conference with the aim to discuss with the highest state officials key issues that are important for improvement of business environment.

In his introductory speech, FIC President Kjell-Morten Johnsen welcomed openness of Serbian authorities for active communication with the investors. He pointed out that maintaining prudent monetary and fiscal policy together with constant work to ease the doing business are recognized as milestones for creation of sustainable economy. He suggested that building political consensus around importance of good business environment is crucial for long-term prospect of the Serbian market.

Further harmonization of Serbia regulations with EU standards and consistent implementation of laws were particularly highlighted at the conference. In particular, participants discussed measures related to the areas of court and resolution enforcement system, labour and employment, spatial planning and construction, trade and competition protection. Over and above, it was concluded that more transparent and consistent application of tax policies would bring more certainty and would generate positive impact on the economy.

Foreign Investors Council has since its establishment been building a partnership with the Government of Serbia, always striving to use the extensive experience of its member companies to provide adequate support to the Government of Serbia in the process of transition of the economy, as well as the society at large. The association was established in 2002, currently gathers over 120 companies, which have invested over €11.6 billion and employ more than 69,000 people.