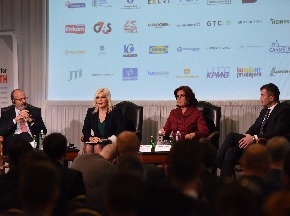 Belgrade, 13th November 2019 – The Foreign Investors Council presented the White Book 2019 to the highest Government officials and stakeholder community. The White Book, written by FIC members, is the major product by which, for more than a decade, FIC gives recommendations aimed at supporting economic growth and better living standard of Serbian citizens. The event was opened with introductory address by FIC President Yana Mikhailova, followed by insight into FIC Index 2019 by White Book Editor-in-Chief Miroljub Labus, as well as addresses by Head of EU Delegation in Serbia Sem Fabrizi and Prime Minister Ana Brnabić.

In her introductory speech FIC President Yana Mikhailova noted that “in-between two White Books Serbia continues steady but moderate progress in reforms. On the positive note, this year we have 41% progress in partial implementation of White Book recommendations from 2018, which is higher than the average of 30-40% from 2011, when the White Book score card was first introduced. This year we achieved 7% better progress compared to last year and we welcome this achievement and hope that this positive trend will continue in months to come. Therefore we strongly recommend further acceleration of reforms with joint goal to come as close as possible to 50% in implementation of the White Book recommendations next year. 3 key FIC expectations from the Government are to continue and accelerate membership negotiations with EU as means to improve both business regulation and their implementation, work on sustainable fiscal consolidation (structural reforms, especially privatization and corporatization of state-owned enterprises) and  improve law implementation, especially in tax area (strengthening tax administration) with focus on reforms in 9 priority topics: tax, labour, digitalization& e-commerce, real-estate, inspections, food safety, pharmaceuticals and overall legal framework, with emphasis on regulations on bankruptcy and foreign exchange operations”, concluded Mikhailova.

According to “FIC Index”, which was published in the newest edition of the White Book, in the period between November 2018 and October 2019, 2 top performers remain the same as last year: tobacco and transport while this year we have 2 new: oil and gas and notary. However, there is still room for improvement in areas which FIC sees as priorities. Out of 9 priority topics of the FIC-Government White Book Task Force, digitalization, anti-illicit trade, bankruptcy and pharmaceuticals mark moderate progress, real-estate and tax mark some progress, while labour, forex and food safety lack progress.

This year, FIC continued with publishing of “The White Book Essentials” – brochure which presents main conclusions of this year’s publication, and in order to fully embrace the era of digitalization, but also to be environment-friendly, FIC again opted against printing the White Book publication which is available for free download on the FIC website (www.fic.org.rs).

About FIC:  From an independent business association created by 14 companies, we stayed faithful to our principles and grew to gather around 120 companies from all around the globe who have invested over EUR 35 billion and directly employ more than 100,000 people in Serbia compared to EUR 150 million of investments and 3.160 employees in 2003!. FIC main goal is to influence the improvement of business climate in Serbia by making concrete reform proposals and building a business portal for communication with the authorities in Serbia. FIC is also focusing on promoting solid business ethics and high corporate governance principles within the organization and towards local companies, the Government, and other external stakeholders. Through support and active engagement of membership, FIC has proven to be a strict guardian of the business community interests and at the same time a reliable partner to the Government of Serbia and other relevant stakeholders.