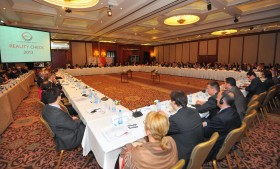 Belgrade, May 20th, 2013 – The Foreign Investors Council organized today its third “Reality Check” Conference with the aim to discuss with the highest state officials key issues that are important for improvement of the business environment. The main goal of the conference is to remind the authorities about recommendations that FIC made in the latest White Book edition and check the status of their implementation. In an open dialogue with the Serbian Prime Minister Ivica Dačić and National Bank Governor Jorgovanka Tabaković, representatives of the Foreign Investors Council discussed status of reforms and ways to further raise competitiveness of Serbia as an investment location.

In his introductory speech, FIC President Costin Borc welcomed readiness of Serbian authorities for active communication with the investors saying that ‘’Government has demonstrated openness for dialogue and started to recognize business climate priorities listed by FIC”. He commended the Government for organizing consultations around important laws, saying that FIC welcomes given opportunities to share its suggestions. Borc said main FIC expectations are for the Government to launch structural changes, improve enforcement of laws and strengthen capacity of state administration. Borc noted that the Government needs to create a clear reform roadmap to ensure a stable, predictable and consistent business climate which would bring more transparency and efficiency in all fields.

The conference achieved its goal to further increase the confidence and solidify the dialogue between the Government and foreign investors. In terms of future actions, FIC expects the Government to work on overcoming identified obstacles in the dynamic and sustainable manner, while FIC is ready to be a steady partner in this process.

From a group of 14 major foreign investors which founded the association with the support of the OECD in 2002, the FIC grew to become an independent organisation which today includes over 130 member companies, coming from around the globe and covering a wide range of sectors and industries. From an organisation which accounted for EUR 150 million in investments, had 3,160 employees, and 1.24% of GDP in 2003, the FIC today gathers companies, which by the end of 2012, invested almost EUR 17 billion, employed more than 88,000 and directly accounted to 16.54% of Serbia’s GDP in 2011. In 2013,  the association is still growing.