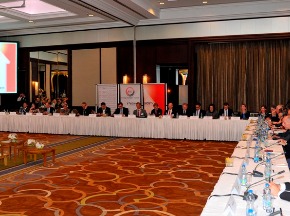 The Foreign Investors Council organized today its fifth “Reality Check” Conference with aim to discuss with the Serbian Government status of reforms and ways towards obtaining sustainable business environment in Serbia. In an open dialogue with the Serbian Prime Minister Aleksandar Vučić, ministers and EU Commissioner for European Neighbourhood Policy and Enlargement Negotiations Johannes Hahn, representatives of the Foreign Investors Council exchanged views in particular on few concrete issues which are important for improving competitiveness of the Serbian market. In his introductory speech, FIC President Ove Fredheim said “In the past 6 months Serbian Government continued with significant improvements of the business climate through changes of two important laws – Construction and Inspectionsˮ. He emphasized that the new Construction Law is well implemented and it has led to shortening of deadlines in issuing construction permits, the Labour Law that was changed in summer 2014 was also successfully implemented and changes of Inspections Law brought some improvements aimed at ensuring better coordination of the inspection services.  Main FIC expectations from the Government are to continue harmonizing laws with EU Acquis and achieve tangible progress in enforcement of laws. ”Better law implementation across all fields should be an imperative, to be achieved through public administration reform and increasing administrative capacity in the ministries and other state institutions, with special focus on Tax Administration and inspections”, noted FIC President. He concluded that reforms done through EU accession negotiations and active dialogue with the private sector will foster Serbia’s competitiveness and emphasised that FIC can help in this process, as 70% of its members come from EU.

The main targets for better implementation are: accelerated and transparent privatization; prompt creation of Coordination body to enable efficient and consistent implementation of the new Law on Inspections; more consistent application of tax regulations and better coordination between Tax Administration and Ministry of Finance; more liberal interpretation of the Forex Law; and unified interpretation of the Law on Employment of Foreigners by relevant institutions. The main targets for adoption of laws are: liberalization of Forex Law; adoption of Law on Charges to safeguard from new para-fiscal charges; adoption of Law on Land Conversion to enable ownership over land; harmonization of Law on Personal Data Protection with EU regulations; and regulation of Staff Leasing. In past half-a-year, some progress is marked in 6 out of 9 areas: anti-illicit trade, real-estate, human resources, food & agriculture,insurance and telecommunications. Least progress is marked in 3 areas: overall legal framework, tax and leasing.

About FIC:The FIC continues to expand, gathering more than 130 foreign companies, who have invested over EUR 22 billion, contributed to 18.0% of GDP in 2013 and directly employ more than 96,000 people in Serbia, based on further growth and inflow of new members. The main goal of the association is to influence the improvement of business climate in Serbia by making concrete reform proposals and building a business portal for communication with the authorities in Serbia. FIC is also focusing on promoting solid business ethics and high corporate governance principles within the organization and towards local companies, Government, and other external stakeholders. Through support and active engagement of membership, the FIC has proven to be a strict guardian of the business community interests and at the same time a reliable partner to the Government of Serbia and other relevant stakeholders.