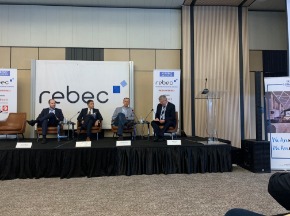 FIC Vice President Vladislav Lalic promoted FIC as a reliable partner for building stronger economy in Serbia at the REBEC conference dedicated to the real-estate. On June 18, at the institutional panel on the second day of the conference, he said that in last 18 years a business climate in Serbia faced a clear development in a good direction. Serbia achieved a steady and moderate growth; there were improvements in business climate, decrease of unemployment, macro-economic stability etc. However, the growth should be faster and wider in terms of reforms as well as sustainable, as he highlighted.

In terms of the biggest obstacles faced by the new and existing investors, he noted that they are the same, notably: lack of predictability in the business environment; postponing of privatization and corporatization processes, which makes uneven playing field; and issues with implementation of laws as one of the key problems in Serbian business environment. FIC VP also cited the following three solutions for these key obstacles: to work on sustainable fiscal consolidation, in particular privatization and corporatization of state owned enterprises; to improve law implementation, especially in tax area i.e. strengthening tax administration; and to provide more transparency in public consultations, primarily by stopping the practice of adopting laws in urgent procedure. As per positive developments in the real-estate field, he mentioned continuous increase in number of construction permits issued, due to integrated procedure and e-platform and increased efficiency in execution of conversion proceedings; also, adoption of the Law on the Registration Procedure with the Cadastre and certain progress in implementation i.e. increased efficiency in resolving client applications and improvements in communication with clients; and, changes of the Law on Agricultural Land which enabled EU citizens to buy up to 2ha of agricultural land under specified conditions and increased efficiency in execution of conversion proceedings.

Vladislav Lalic promoted FIC as the relevant and independent organization gathering members that have invested more than 33 billion Euros in Serbia,  employ  over 100.000 people (compared to €150 million of investments and 3.160 employees in 2003) that possess knowledge and experience to help Serbia utilize its potentials, and are willing to provide support in making the change. Other panellists included Martin Jacko from Lensky Genzer & Partner and Dragan Draca from PwC, who is also the FIC Tax Committee President. Panel was moderated by the London law firm Reed Smith Partner Petar Orlic, who is also the President of the British-Serbian Chamber. REBEC is held since 2008. It’s a three day conference and exhibition, gathering wide variety of participants involved in the real estate, mostly from private sector, but also from university.