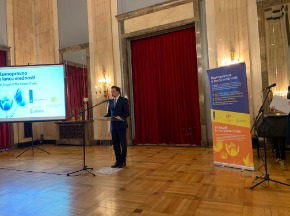 On July 1st, FIC BoD member Goran Pekez promoted FIC role in improving gender equality in Serbian economy at the conference within the “Equal in the Supply Chain Initiative” organized by the Association of Business Women with the Office of the Deputy Prime Minister Zorana Mihajlovic.

Goran Pekez presented FIC as a strong association that gathers around 120 companies and invested more than 33 billion EUR and employ over 100.000 people in Serbia. He said that FIC members respect gender equality and that they strive to implement their yearly programmes in a way to develop woman entrepreneurship. He noted that women represent more than 51% of Serbia’s population and a bit more than 50% of working age population and therefore the role of women cannot be neglected. FIC members work on development of the supply chain of local suppliers both in terms of the application of new standards, technologies as well as the modernization of enterprise management. FIC Board member also presented data from his company JTI where there is a 40% share of women in the company management. He concluded that he is of the firm belief that the best option is to create the system that would equally respect both genders.

Equal in the Supply Chain Project is supported by FIC and AmCham. The goal of the project is to promote inclusion of women entrepreneurs into the supply chain of big companies. Same as last year, the conference featured exhibition of entrepreneurs and handcrafts. FIC members were also invited to attend the event. Apart from Goran, keynote speeches were also delivered by Olivera Popovic, Vice President of the Association of Business Woman and Ljiljana Loncar, advisor to the DPM Mihajlovic for gender equality.