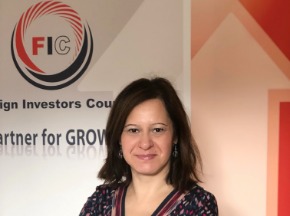 At the second day of the Summit on April 5 she outlined that digital transformation could help the countries in the region catch up economically and socially with the EU and facilitate their path towards EU membership. “Digitalization can help not only businesses grow, but also fast-track regional cohesion and EU integration”, she said. FIC Executive Director showed the data on the digital transformation gap between the region and the EU. As key preconditions for digital transformation, she cited the following: political stability; infrastructure development (in particular more active telecommunications infrastructure sharing, streamlining fiber deployment and removing regulatory constraints for network development and base stations deployment); stimulating regulatory framework; and people development through education system, but also through continuous education and building awareness. When it comes to the regulatory framework, FIC Executive Director tackled in particular the issues of E-Document, E-Commerce, video identification, digital signature and needed balance between traditional and new digital business models. As for the State, she said that the digitalization of public administration through E-Government should lead to more efficient work and better service to citizens and private sector. Presentation by Ana Tozzi that can be downloaded below was an excellent opportunity for FIC promotion at the high-level event that gathered high Government officials from Serbia and the region, as well as representatives of the EU, international organizations and the industry. Digital Week was organized around the Summit, and FIC was also present at the International Day of this event as Digital and E-Commerce Committee Member Srecko Sekeljic moderated a panel on April 3.